As you know, I believe private charity is superior to government programs. To that end, I ask all of you to dig in deep this year and help. We have a friend in need. My good friend Darryl Buchannon was instrumental during my 2010 campaign, but he has recently fallen on hard times. He wants to give his family a great holiday season this year. Every bit counts! Click here to give, because you never know when you may fall on hard times and need a little help yourself!

Today marks the 225th anniversary of the 1787 Continental Congress signing the United States Constitution in Philadelphia.

“The two enemies of the people are criminals and government, so let us tie the second down with the chains of the Constitution so the second will not become the legalized version of the first.” — Thomas Jefferson

Now we just need to elect a slate of legislators and a President who intend to uphold their oath to defend the Constitution against all enemies, foreign and domestic.

This showed up in my mailbag today. Funny regardless of whether or not it is true, but according to Snopes, it is true!

This is a good one!!

Look at the two pictures; then scroll down
This is an actual letter sent to a man named Ryan DeVries regarding a pond on his property. It was sent by the Pennsylvania Department of Environmental Quality, State of Pennsylvania . This guy’s response is hilarious, but read the State’s letter before you get to the response letter, you won’t stop once you start.

This is an actual letter: State of Pennsylvania ‘s letter to Mr. DeVries:

It has come to the attention of the Department of Environmental Quality that there has been recent unauthorized activity on the above referenced parcel of property. You have been certified as the legal landowner and/or contractor who did the following unauthorized activity:

Construction and maintenance of two wood debris dams across the outlet stream of Spring Pond.

END_OF_DOCUMENT_TOKEN_TO_BE_REPLACED

Question: What do all of these things have in common?

Answer: They all remind me of Brandon Raub.

Even if I do not agree 100% with everything Brandon says and believes, I support his right to have and express his opinions. The fact that he is being illegally held against his will in the very city I live in makes me sick to my stomach. This is not the last I will have to say about this topic. More to come.

This was in the mailbag this morning (thanks, Sid!). I am a geek, I love auctions, and I fight in the political realm. This billboard hits two out of three! 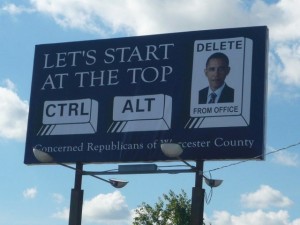 After last week’s announcement regarding politics, some of my friends, family, and colleagues asked whether I am running for office and if so, which office I am running for. Just to clarify things, I am not currently running for any office. For now, my goal is to simply be active and involved again after taking some time off to focus on family, business, and tasks I had postponed for my 2010 campaign.

My plan is to help promote liberty and freedom whenever and wherever I can. When future opportunities to run for office present themselves, I will evaluate them as they come up.

I am humbled by the outpouring of support and encouragement. Thank you!

On Saturday, July 7th, 2012, the SW Virginia Tea Party held their Independence Day celebration in Abingdon. I discussed putting my comments online for Mr. Trivett to read, so here they are!

My name is Stuart Bain, and I hail from Salem, Virginia. My family and I were just recently redistricted into the 9th Congressional District, so I appreciate the warm welcome and look forward to learning the lay of the land.

END_OF_DOCUMENT_TOKEN_TO_BE_REPLACED

“All politics is local.” — Tip O’Neill

Liberty lovers, it is time to take action. It is time to turn the tide of politics in the Roanoke Valley. Do you meet these criteria?

If so, we need your help. It is time to turn off the TV and get involved. America’s Got Talent can wait. Mr. John Brill is the Chairman of the Roanoke City Republican Committee, and he needs as many liberty-minded voters as possible to join the Committee. The Committee is holding a mass meeting on July 18th. If you are ready to take up the cause of liberty, I urge you to contact Mr. Brill before 5:00PM EDT on July 9th and inform him of your intention to join the Committee. Help him bring more liberty-minded candidates to office.

Take action now and get involved! Thank you for your willingness to support the cause.

Over the course of the past year and a half since the November 2010 election, I was somewhat absent from the political landscape. My absence was mostly due to personal obligations involving family, work, and other commitments. During this period, I maintained as watchful an eye as I could on the overall direction and climate of the political landscape. I attempted to keep up with current events in local, state, and national politics; but my time and availability limited my ability to be involved and engaged in related activities. I watched as many battles for liberty were fought at local, state, and federal levels. Some were won, and some were lost. Celebrate our victories, and learn from our losses; but do it quickly for there are more battles to be fought in this struggle. Our fight is no longer “like” war. It is war, albeit one fought with words and ballots instead of lethal weapons.

After prayerful consideration and discussion with my wife and family, we decided it is time to once again take up the cause. To that end, we will rejoin the fight alongside opponents of tyranny to defeat those who stand in stark opposition to freedom, liberty, and The Constitution. Marines are trained to run towards the battle, so count me in.

Looking for anti spam software? Look no further than MXGuarddog. This cloud-based service will seamlessly protect your email from spam and viruses without the need for any additional servers or infrastructure in your datacenter.